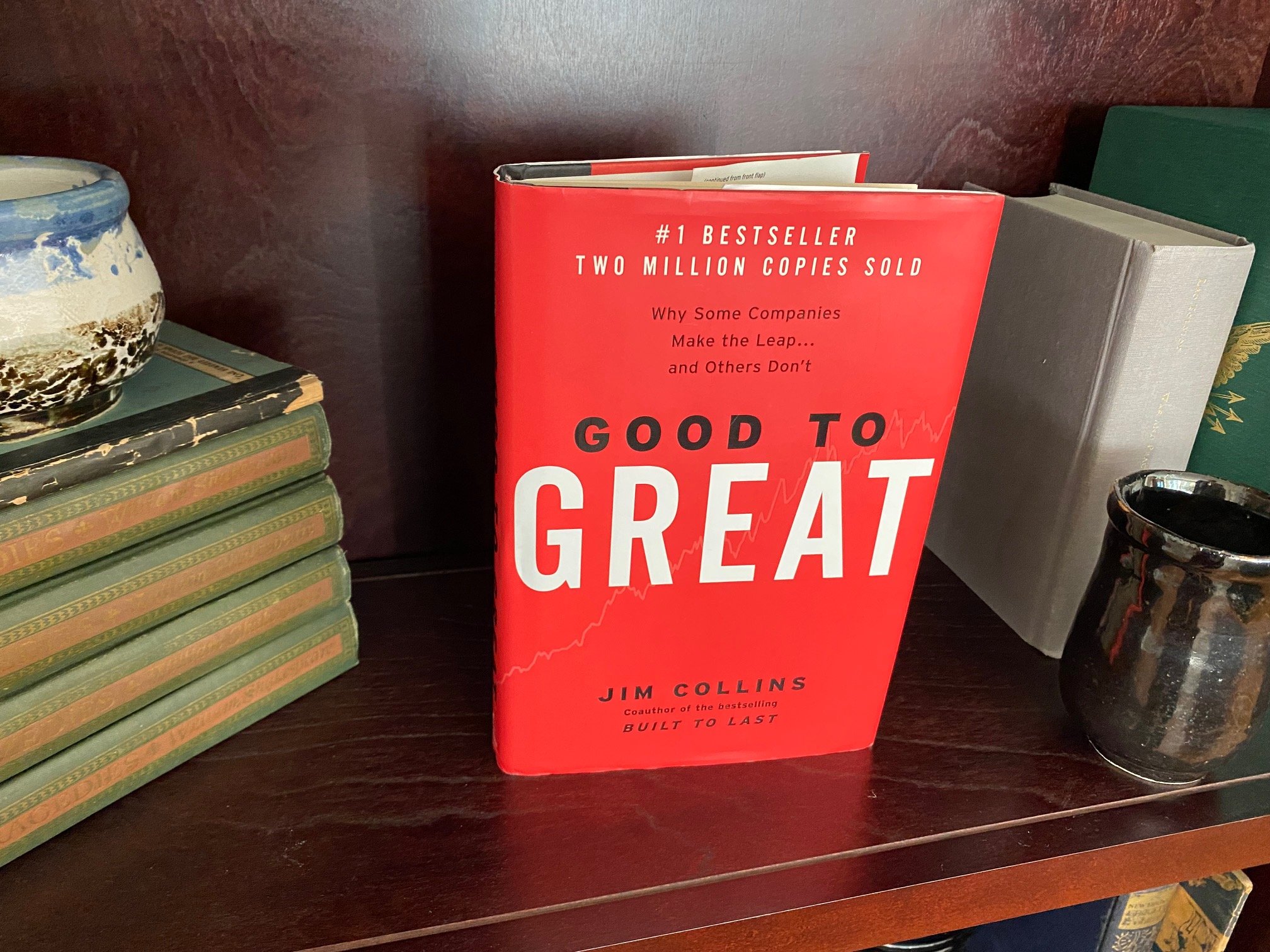 Good to Great turned 20 Saturday (10.16.21). Originally released on October 16, 2001, Jim Collins’s seminal book influenced almost everyone in business, directly or indirectly. To date, it has sold over 4 million copies and, for a time, almost every other business book referenced it.

My job takes me to the offices of the leaders of organizations (banks, businesses, non-profits) and the distinctive red cover of Good to Great is the thing I see most on the shelves in those offices. Whether someone has a lot of books or just a few, Good to Great is likely one of them.

There are, of course, criticisms of Good to Great. The most prominent of which being that many of the companies that achieved the book’s specific metrics for greatness did not stay great and that the book’s prescriptions were generic. To the former, Collins maintains that the companies that declined in the years after the book was published stopped doing the things that made them great. As for the latter, generic is basic. I would suggest the Knowing-Doing Gap (Pfeffer, Sutton, Harvard, 2000) may apply. If the basics are not executed, nothing else matters.

As a tribute to Good to Great, on its 20th birthday, let’s review its prescriptions for greatness. It’s worth noting that these are not the opinion of Jim Collins or anyone else. They are the results of a 5-year research study Collins and a team of researchers conducted. Collins taught at The Stanford Graduate School of Business, and he brought academic rigor to his book writing.

Level 5 Leadership: Collins told his research team there would not be a “leadership finding” in Good to Great because the idea that leadership is the answer to everything prevents a deeper understanding of the drivers of success. But the research team, known as The Chimps, pushed back and finally convinced Collins, with data, that the leaders of the Good to Great firms had a unique differentiator: They were fiercely ambitious, as you might expect, but not for their own success, for the success of their organizations. To this end, they absorbed the blame themselves and distributed the credit to their teams.

The Stockdale Paradox: Named for Admiral James Stockdale, who was the highest-ranking US service member held as a prisoner of war during the Vietnam War. Stockdale said he learned in the prison camp that unrealistic optimism was emotionally devastating, but so was having no hope. His reconciliation of these two realizations was what Collins called The Stockdale Paradox. The men who survived the atrocious conditions of the camp and later thrived were the ones who faced the brutal facts of their current circumstances AND knew they would eventually use the experience for good. Collins’s prescription for businesspeople is to have the courage to confront the brutal facts of whatever the current situation is, yet never lose faith that your organization will thrive.

The Hedgehog Concept: Sustained success is found at the convergence of three circles (a Venn diagram):

Or, if you prefer:

A Culture of Discipline: This is not about rigidity; it is about rigor. Be flexible in meeting changing challenges, but relentless in measuring and evaluating your results. Never let yourself off the hook.

Technology Accelerators: Technology for technology’s sake wastes time and money and makes you less successful. Technology is not a strategy; it’s a tool. The right technology will accelerate your progress.

The Flywheel and the Doom Loop: The big Mo – momentum – flows in both directions. It can propel you upward or drag you down. Feed the flywheel with attention and resources. Starve the doom loop. This sounds obvious, but organizations do the opposite every day. Routines and rituals are great for efficiency but bad for agility. Newton’s 1st Law – An object in motion tends to stay in motion in the same direction unless acted upon – applies to business, as well as physics. Reevaluate an innovate often.

No one book is the end all on any subject and, since reading Good to Great I’ve read hundreds of books. Yet, it still stands out as one of the most significant.

Engaged Banker eXperience is 8 experiences based on behavioral science that build better bankers.